What is the Fellowship of Saint Benedict 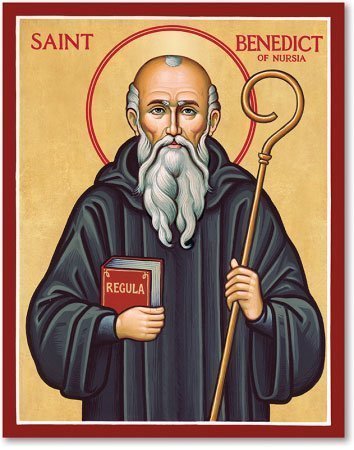 How to Live a Monastic Life Without a Monastery or What is the Fellowship of Saint Benedict? The Venerable William G. McLoughlin Are you hastening toward your heavenly home? Then with the help of Christ, keep this little rule written for beginners. (Rule of Saint Benedict 73:8) We are in downtown Asheville, North Carolina. It’s Halloween night and several people from the parish are prayer walking around some of the pagan events taking place in the city’s central square. We are looking for opportunities to bear witness to Christ. I sit down on an empty bench and wait for someone to confront me. I know my clerical collar is likely to prompt such a confrontation. I do not have long to wait. A young man in his 20s approaches me and asks, “Where is the love that you Christians talk about? All I ever hear from any of you is judgment. I don’t see any difference in the way you Christians live and anyone else.” Therein lies a problem for the Church.

Only transformed lives will bring about a revitalized Church and transformed communities. There is a pagan culture out there hungry for real hope, real truth, and Christians who manifest Jesus in their lives. For only when the world recognizes the transforming power of Christ in the lives of the saints will they actively pursue affiliation with Christ and His Church.

The culture of the 21st century is not much different from that which Saint Benedict experienced in A.D. 500. As a young man he had traveled to Rome for his education. The barbarians had overrun Rome just a quarter century before. Young Benedict could not withstand the moral depravity of the culture and he fled. At first he tried becoming a hermit, but many young men heard of him and pursued him for mentoring. Eventually, Benedict accepted that living in community was a preferable approach for sustaining a Christian lifestyle. He began to gather some of these young men around him, and over time he produced his rule for Christian community: The Rule of Saint Benedict.

For 1500 years this “little rule for beginners” has been a guide to assist those who hasten toward Christ. It is not a substitute for the Gospel: it is practical guidance for living the Gospel in Christian community. Whenever the Church has practiced the discipline of monastic spirituality, the Church has flourished. When monasticism has waned, so has the spiritual discipline of the Church, and both Church and society have suffered. At its core the Rule of Saint Benedict is a guide in the art of Christian living for those who follow it. People throughout history have pursued the Rule of Saint Benedict in hard times for the same reason that the young men of the 6th century sought out Benedict himself. These people have seen that the way of life presented in the Rule provides guidance for embracing the truth of the Gospel, and in that they find hope in dark times.

Cultural change has followed wherever the Rule of Saint Benedict has be faithfully observed. Pope Paul VI, in his 1964 Apostolic letter entitled Pacis Nuncios, names Saint Benedict the “Principal Patron of All of Europe.” He says that where Benedictine monasteries have been established education has flourished, the poor and needy have received help and hope, hospitality and generosity has taken hold in the community, and above all, Christ has been brought to the masses. According to Pope Paul, “At the fall of the crumbling Roman Empire, while some regions of Europe seemed to have fallen into darkness and others remained as yet devoid of civilization and spiritual values, he it was who, by constant and assiduous effort, brought to birth the dawn of a new era.”
Benedictine spirituality is a promise of hope in this era as well. There is a movement in the Church to reclaim covenantal community and the spiritual discipline of the Rule of Saint Benedict. It has been labeled by many “the New Monasticism.” For example, Rod Dreher has written the book The Benedict Option in which he promotes Benedictine discipline as the answer to the travesty of liberal society. But whereas he promotes a fortress type mentality, an “us-against-the-world” approach, there is something to be said for being a living witness in the world. Jesus said that He did not desire to take His disciples “out of the world” but that the Father “would protect them from the evil one…” Jesus says He has “sent them into the world” and “that they may be sanctified in truth.” (John 17:15-19) To encourage a deeper commitment to Christ and to His Body, the Church, we need person-to-person relationships in a covenant community that brings the Good News to the secular world. As a result, we will need each other in order to stand fast when presented with challenges in our ministry to this world. The Fellowship of Saint Benedict is the CEC expression of the Benedictine community. The Fellowship offers its members the gift of community and companionship to support one another in our efforts to live the Gospel life in accordance with the Rule of Saint Benedict. Saint Benedict declares in the Prologue of the Rule that he is establishing a “school for the Lord’s service” (v. 45). Historically, the monastic stream has consistently offered formational resources to the Church, and that is still available to us. We can go to school together to learn from the practice of prayer and life together that has 1500 years of experience behind it. The CEC does not have a monastery, and so we practice this monastic spirituality in a new way, bringing from the storehouse what is old and what is new (Matthew 13:52).

In the preamble of the handbook for the Fellowship of Saint Benedict it states, Members of the Fellowship of Saint Benedict promise to order their lives in accord with the spirit of the Rule of Saint Benedict and seek to live their lives wholly consecrated to God’s will. They are therefore encouraged to be faithful witnesses of Christ by striving to bring the Gospel message and God’s way of holiness to the world around them. Each member promises to strive for God’s honor and glory before all else, thereby fulfilling the Benedictine motto: “That in all things God may be glorified.”

We do this through the “Work of God” (opus Dei) which is the practice of Daily Prayer, through Lectio Divina, holy reading of Scripture and the Church’s teaching, and daily work in our secular jobs. We also meet monthly on the internet via streaming video to encourage one another, share experiences, and hear teachings from members and guests. The Fellowship of Saint Benedict seeks to heed Saint Benedict’s call for a balanced life of work and prayer, time alone and in community. In essence, the Rule of Saint Benedict is a pattern of life that is for all people. It is a Rule for “ordinary” people. We in the Fellowship are ordinary people who seek to fulfill Benedict’s challenge: “Let them prefer nothing whatever to Christ, and may He bring us all together to everlasting life.” (RB 72:11-12)

If you would like more information about the Fellowship of Saint Benedict, please visit our web site at http://www.cotres.org/fsb, or you can call the Fellowship Director, Fr. Bill McLoughlin, at 828-691-5455 or send him an email at cotresur@att.net.

The post What is the Fellowship of Saint Benedict appeared first on ICCEC.