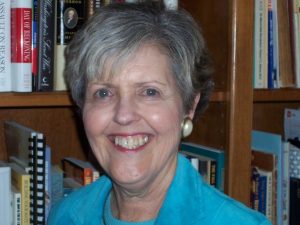 A
teacher, a scholar, an athlete, accomplished, a speaker, an evangelist, a
missionary, an organizer, competitive, driven, a prayer, an author, a great
cook, a sweet tooth, a voracious reader, a swimmer, a wife, a mother, a
grandmother, a minister, a friend.

All
these words have been used to describe Judy Massey in the last few days. Her
story begins in Atlanta on June 30, 1944 at what was then Crawford Long
Hospital. An Atlanta native, she would be raised by her stepfather, J. Allen
Rainwater, a building products salesman, and her mother, Ora Belle (aka Bea)
Rainwater, one of Atlanta’s top executive secretaries. Later, a sister, Kathie,
would join the family.

Judy
attended Atlanta city schools and lived next door to Truett Cathy , before Mr.
Cathy imagined or founded Chick-fil -A. The family attended and were active in
Jefferson Avenue Baptist Church. Judy was a Brownie, a division of the Girl
Scouts, and was active in the children’s and youth programs of Jefferson Avenue
Baptist Church.

When
Judy was 11 or 12 years old, she had a dream in which God called her to foreign
missionary work. As the years passed, she would feel the tension between the
call to mission and the strongly felt call to have a family. She later realized
that God wanted her to do both.

She
attended Southwest High School where she was a member of the Young Homemakers
and the National Honor Society. She was a straight “A” student and skipped the
11th grade and graduated a year early.

Judy
wanted to attend the University of Georgia, but her pastor urged her to
consider Carson-Newman College, in Jefferson City, Tennessee. A year earlier, a
young man named Paul Massey aspired to attend the University of Kentucky. His
pastor encouraged him to enroll in Carson-Newman College. So it was that both
Paul and Judy went to what is now known as Carson—Newman University, a liberal
arts college affiliated with the Tennessee Baptist Convention. Paul was a
sophomore, Judy a 17-year-old freshman when they met in Bible class.

Paul
said to himself, “This is the cutest girl I’ve ever seen in my life.” After
three weeks, he summoned the courage to ask her out. “I don’t even know you.”
Judy replied. “I’m not going out with you.” Paul told her, “Just check me out.
Ask around about me. People will tell you I’m a nice guy and you’ll be safe with
me.” Check him out she did. A few weeks later, he asked her out again and, this
time, she accepted. They never looked back. “I knew from the beginning,” Paul
said,  “This was not just a cute girl. This was a lady.” They both
attended a nearby Presbyterian church where they were impressed by the young
pastor.

Paul
graduated first, of course, and went to the University of Tennessee School of
Law. He quickly determined that law was not for him and, after the first
semester, left, moved to Atlanta, and took a position teaching history at an
Atlanta high school. There, he waited for Judy to graduate. Judy moved to
Atlanta to teach first grade. They were married June 12, 1965 at West Manor
Baptist Church.

The
following summer, the couple took 18 high school students and spent a summer in
Europe, with the Foreign Language League, living in Switzerland as the students
studied. They visited several countries in Europe that summer.

In
1968, Paula was born, followed by Jeff in 1970. Following the birth of Paula,
Judy taught part time until Jeff was five years old. She then returned to
teaching school for a few years in Douglas County. It was at Mount Carmel
Elementary School that Judy was named “Teacher of the Year.”

Both
Paul and Judy returned to school, earning master’s degrees from Georgia State
University. They worked, went to school at night (on alternate nights) and
raised their children because, as Paul shared, “We were too dumb to know it
couldn’t be done.”

Paul
became a principal and later left education to become the President of the
Printing Industry Association of Georgia. They attended and were active in
First Baptist Church in Douglasville. Judy joined the Junior League in Douglas
County. Judy taught herself to play bridge and started a bridge club whose 20 members
met in the Massey home.

They
later became part of the First Presbyterian Church in Douglasville. Paul became
an Elder and Judy was active in the women’s ministry and the children’s
ministry. During this time they both experienced the in-filling of the Holy
Spirit. Paul and Judy helped plant an independent charismatic church and help
lead that congregation for the next ten years. Looking for a place to rest and
be refreshed after so much activity, they became part of one of Atlanta’s mega
churches, Mount Paran Church of God, during the tenure of Dr. Paul Walker.

Paul’s
Board of Directors at PIAG gave him a membership at one of Atlanta’s golf
clubs. Paul, who didn’t know how to play golf, took lessons and learned. He and
Judy also took up sailing during these days. Judy didn’t play golf either, so
Paul set out to teach her. And he did. Judy was so competitive at the game that
she started to beat Paul. A lot! In fact, Paul confesses that she beat him “all
the time.” Evidently, Paul was a great teacher!

One
day, during one of their games, Judy swung the club, hit the ball, which sailed
toward the cup, and sank in hole-in-one! The odds of making a hole in one for
an amateur golfer are 12,500 to 1. Even at the professional level, the odds of
2,500-1. About 200 people in the restaurant saw the hole in one occur and broke
into cheers. As a bit of trivia, the odds of the same player making two holes
in one during the same round of golf are 67,000,000 – 1. She did not get that
second hole-in-one.

Judy
was a great tennis player as well and gained a status as an “A Level Player.”
She and a teammate won a Doubles Tournament in one of Atlanta’s tournaments.

In
1988, Paul and Judy moved to Peachtree City because of the golf. In fact, their
backyard borders a golf course. They began to attend a fairly new church named
Fayette Fellowship, which later relocated and was renamed Trinity Fellowship.
They were there during the time that Trinity Christian School began with 17
students. The school now has over 1,100 students. They both held various
leadership positions and Trinity is where my personal journey with the Massey
family began, as I was the pastor, having arrived in 1983.

In
1996, Paul and Judy Massey, nine other people, and eight members of my family
planted Christ the King Church. It was also in 1996 that Judy was appointed by
Atlanta Olympics Quest to oversee prayer efforts for each event of the 1996
Olympics. In fact, I do not have the space to relate all of Judy’s ministry
endeavors, but here are a few:

She was
the Georgia State Leader of Women’s AGLOW International for over ten years.

She
served as prayer coordinator for Wellspring Living, an Atlanta based ministry
to sex trafficking victims.

As a co-founder of the Society of Christ the Healer, she made
three trips to Uganda and Kenya for mission and medical health work. The
Society also funded a major medical outreach to the island of Mindanao, in the
Philippines. On one of the Ugandan trips, she prepared for a Vacation Bible
School for 150 kids. The Crayola Corporation provided crayons for the event.
But over 700 children showed up. She was only able to give each child one
crayon, which grieved her. Judy also did missionary work in Albania, the
Republic of South Africa, and Mongolia.

She was
a Licensed Liturgical Minister. She spoke and taught at many women’s
conferences.

She was
installed by the late Bishop John Holloway as a Commissioned Minister of Evangelism
and Church Growth in the Charismatic Episcopal Church.

She was
named as the Director of Continuing Education for the Diocese of the Mid-South
by me. In this position, she offered seminars and workshops on a variety of
subjects for both clergy and laity. For this work, she was one of the few
individuals who received the Diocesan Commendation of Excellence Award.

And
Christ the King, she and Paul started the Primetimers Ministry for those 55 and
up which has remained active for 15 years.

She
wrote four books that would serve as study guides for the seminars and
workshops.

Somewhere
during all this activity, she found the drive and determination to earn a
Doctor of Ministry from Regent University.

In
2004, Paul and Judy planted Church of the Holy Cross in Fayetteville and
faithfully served for 12 years before retiring.  ]

They
were travelers. Over the course of their marriage, the couple visited all 50
states and 48 countries on five continents.

It was
in 2002 that she was diagnosed with congestive heart failure. Even then,
as her health diminished, she taught two Bible studies in two local churches up
until her last days: Peachtree City United Methodist Church and New City
Church.

Judy
was a fighter. A competitor. Her son Jeff said, “She wanted to win. She had a
drive to be successful. She was a doer not a talker.”  Paul said that,
“She was confident in that she knew who she was.” After all, she had that dream
back there at the age of 11 or 12.

“She
thrived on Chaos,” Jeff remarked. “She always was reading– five books at a
time,” her daughter, Paula Huffman, shared. Granddaughter Haley always
remembered her laugh and how she loved to make cookies and the best
Thanksgiving dressing. She loved to swim in the ocean where she would ride the
waves all day.

On
Saturday, March 7, Judy was scheduled to teach a seminar to the clergy and
laity of the diocese. It is, perhaps, ironic and fitting that the topic she was
to teach was, “Finishing Well.”

From prison, prior to his execution, the aged St.
Paul wrote to young Timothy, “ I have fought the good fight, I have
finished the race, I have kept the faith. Now there
is in store for me the crown of righteousness, which the Lord, the
righteous Judge, will award to me on that day—and not only to me, but also to
all who have longed for his appearing.” (2 Timothy 4 NIV)

On February 28, 2020, at 8:00 a.m., Dr. Judith F.
Massey, at the age of 76, having received Last Rites, became absent from the
body and present with the Lord.  She fought the good fight, she finished her course, she kept the
faith.

Judy knew and lived the truth of John 3:16-17: “For
God so loved the world, that he gave his only begotten Son, that whosoever
believeth in him should not perish, but have everlasting life.For
God sent not his Son into the world to condemn the world; but that the world
through him might be saved.”

She knew and taught that
Jesus was the way, the truth, and the life and that no one could come to God
the father except through Him.

From a child, Judy
Massey had a strong, unshakable belief and trust in God. Wherever she was, wherever she went, she was an
Ambassador for Christ representing the King and His Kingdom.

Judy Massey lived and fulfilled the dream she
received as a child.  A packed sanctuary
celebrated her life and mourned her passing on March 3.

Of all the accolades and commendations she
received, the one that was the most important and meaningful was this:

“Well done thou good and faithful servant… Enter
thou into the joy of thy Lord.”