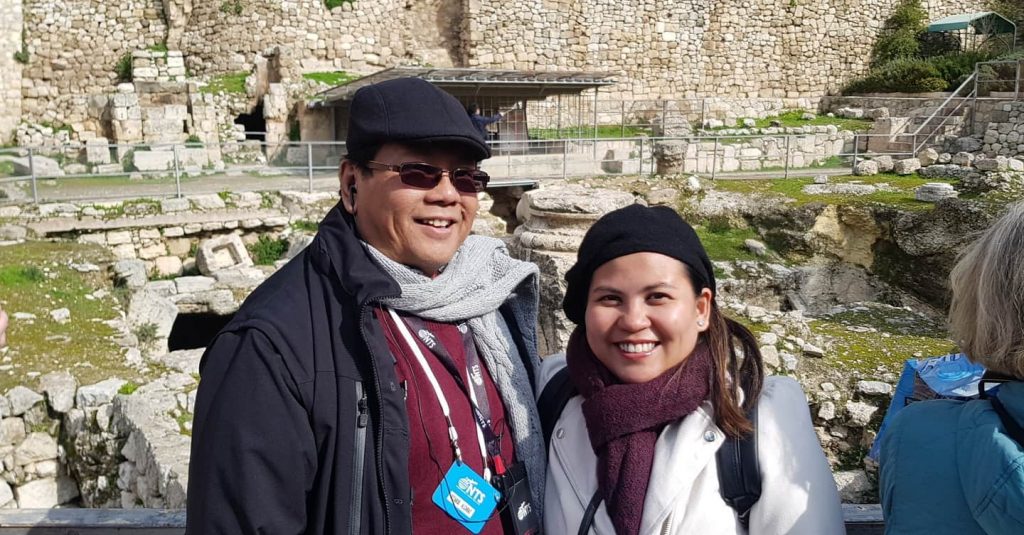 A Biography written by Manna Alcaraz.

“I have been crucified with Christ, it is no longer I who live, but Christ lives in me; and the life which I now live in the flesh I live by faith in the Son of God, Who loved me and gave Himself for me.” – Galatians 2:20

When my dad was born on June 8, 1957, no one could have foreseen that 63 years later, hundreds of people from all across the world would be mourning his death.

His childhood, though filled with funny and cute anecdotes, was nothing short of ordinary. He was a naughty and mischievous kid, the eldest of seven siblings. He loved to draw, enjoyed reading comic books, and messed around with his sisters a lot. He went to school, played tennis and chess, became part of a theatre group — all pretty regular and essential stuff. If nothing changed, he would still be someone that his family and friends would have missed dearly when he passed, though his would have been a light that would go out unnoticed to the rest of the world.

Because when God enters the picture, the ordinary always becomes extraordinary.

Before he accepted God into his life as his Lord and Savior, he was involved in New Age activities and occultism. This included transcendental meditation, astrology computing, some yoga, obsession with UFO’s — it was a way for him to fill a void. But when things only added more confusion, he cried out in desperation to the Lord, and one thing led to another.

On December 11, 1982, at the conclusion of a Life In The Spirit Seminar, he surrendered to Jesus Christ and accepted Him as his Savior and Lord. In a recent interview he did with the youth; he vividly remembers the song being sung back then as he accepted Christ in his life:

That was the start, and there was no turning back from there.

He started his ministry as a volunteer who went to their fellowship venues two to three hours before serving so he could set up. He was perfectly content in arranging the chairs, cleaning up after, and staying behind the scenes. One day, his leader challenged him to share a message in one meeting. He had zero preaching experience, so this scared him and even made him want to run away. But his love for God overcame, and he agreed to do it.

He has shared this story with us countless times. In a homily, during a family meal, in a casual conversation. He would recall how nervous he was on that day, coming in extra early, trying his best to over-prepare. Despite being inside an air-conditioned room, he was sweating profusely. Finally, when he was called to stand in front of the pulpit, he looked at his notes, froze, forgot his message, and was about to have a panic attack.

That was when the Holy Spirit took over. He gave him a sentence to say, and when he spoke, things just suddenly flowed. This changed his view of ministry — he learned that he did not need to do it on his own because he can receive supernatural help from the Holy Spirit when needed.

Shortly after that, he would meet someone who would become his partner in ministry: my mom. They both knew in their hearts that they were called to serve God together. As a young couple in their twenties, they’d go from one bible study to another, sharing the word, ministering to other people, experiencing supernatural things every now and then. This was the height of the Charismatic Movement in the Philippines, and they were on fire.

On December 8, 1984, they got married. On April 3, 1986, mom gave birth to me, their eldest daughter. Both of them met in Manila, served in Manila, and up until I was a few months old, we were all based in Manila. Then came the first plot twist of our family. We were sent to Kalibo, Aklan, so my dad could lead a church that was part of the Christian Life Fellowship there. They left their lives and families in Manila out of complete obedience and surrender to God.

This became the season in their lives when my mom and dad truly learned to depend on God completely. I fondly remember the story of how we didn’t have anything to eat one time because his allowance was delayed. Someone from bible study gave him a tray of eggs, so we all had eggs for breakfast, lunch, and dinner. To commemorate this, every Sunday, our family breakfast before mass would always be instant noodles with a hardboiled egg.

My brother, Elijohn Alcaraz was born on August 23, 1988. It was just the four of us for a certain season, and I remember different members of the church would take turns looking after us whenever my mom or dad needed to do something in the church. When I was 7, I remember my dad traveling regularly, leaving on a Monday and coming back on a Friday, doing Sunday Service, and then leaving the following day again.

This was a bit confusing, not just to me but most of the church members. The church, especially my dad, received so much criticism during this transition, and many members left. But he remained humble through it all, focusing his eyes on Jesus, continually praying and walking on the path he believed God put him in.

My sister Maria Sofia Alcaraz was born on March 13, 1995. We called her our Liturgical Baby because she was born when my dad was already a priest. During this time, we have transitioned from being called Army of the Lord to St. Michael’s Church.

That may have been a significant name change, but the character of the church remained. Whether we were called Army of the Lord or named after an Archangel known to be a defender of the church, it was a church of warriors, and my dad was the general who led it. He was by no means a war-freak or a hot-tempered leader. In fact, he rarely got flustered or angry. He loved the Word of God, stood by it, and was ready to defend it regardless of what the world said was right or wrong.

In 1997, I was in fifth grade, and I remember my mom writing me an excuse letter saying that I would be absent from class because my dad was to be ordained a bishop. My Math teacher read the letter with a facial expression that I wasn’t sure was confusion or disbelief, but told me to catch up on lessons as much as I could when I got back.

Three bishops were supposed to be ordained at the Cathedral of the King, Magallanes Building. Alas, it was an ordination that will be remembered for many years to come because of “The Siege” in Magallanes, and at the last minute, they had to move everything to the Navy Grandstand, Fort Bonifacio, Taguig.

Coincidentally, this is the site of the national headquarters of the Philippine Army, a fitting place for a bishop of the Army of the Lord. On August 22, 1997, he was ordained there together with Bishop Raymundo Abogatal and Bishop Gene Lilly.

February 9, 2001 was his enthronement as Bishop of the Diocese of Visayas. And finally, on January 4, 2018, he was installed as the Primate of ICCEC Asia.

It was a short-lived Primacy, but it was during his term that we finally had a Territorial Convocation, a truly anointed one at that, after 13 years of not having one. On this convocation was a ceremonial passing of the baton to the youth, which then gave birth to Youthnited CEC PH, a group uniting the different youth ministries of Luzon, Visayas, and Mindanao.

The theme for his installation was “One Nation, One Body in Christ.” Unity in the church was one of the things he truly fought for and we are now seeing how his vision is slowly unfolding.

During the pandemic, he did a series of teachings on Psalm 91. It was meant to encourage people to hold on to God’s promise of protection during this incredibly difficult season.

On the last day of the series, he talked about Psalm 91:16, “With long life I will satisfy him, and show him My salvation.” I distinctly remember him saying that a long and satisfying life does not equate to existing for a long time on earth. He said that a long and satisfying life is when we accomplish the reason why we were born. To do the will of God. To align yourself with The Book written for you. Jesus died at 33, but He lived His purpose.

Looking back, I have peace in my heart, knowing that my dad lived his purpose. I know that he had to sacrifice many things in order for him to do the work of God in the church. But he always did it with joy in his heart. I have never ever heard him complain. He was always excited at doing the will of God and seeking His heart. To him, God is worth it.

As I end this, let me share the last message he had to the youth of the territory:

“No matter what happens, always keep your eyes on Jesus. He is your only role model in living a life pleasing to God. Never exchange Him for anything or anyone. He is the only One who loves us completely and unconditionally, proven by His death for us, and is truly worth loving back completely to the end. While others may fail you, disappoint you, and betray you, He never will. Live a life that is completely devoted to Him. It’s only in Him that you discover who you really are, what you were born to do, and the things you can really do. He is so worth it.”

From an ordinary kid who used to draw doodles on his sister’s tummy, to being an extraordinary man of God who has done incredible things for His Kingdom.